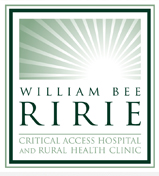 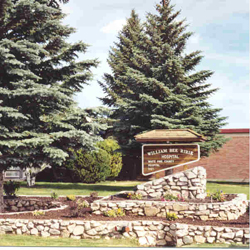 1907 - The Steptoe Valley Unit of the hospital is built. It was financed by Nevada Consolidated Copper and later taken over by Kennecott until it was given to the county.

1968 Jan - Groundbreaking ceremonies were held at the new hospital site. Ella Mae Peterson, hospital administrator, and William Bee Ririe, veteran White Pine doctor for whom the hospital was later named, were holding shovels at the event.

1969 Jun - The new hospital dedication took place. The 44 beds and the majority new equipment the hospital boasted were made possible through Fleischmann Funds.

1990 - A physician clinic was opened with 2 family practice physicians in the Reed J. Anderson building.

1999 - Construction began on a clinic building adjacent to the hospital.

2000 - Clinic construction was completed and there is now space for 10 full-time physicians.

2007 - The largest upgrade and expansion project since the initial building of the hospital was completed. It increased space for the hospital facility, laboratory, and other areas. This expansion improved patient access to areas between the clinic and hospital for appointments and various outpatient services. It also provided convenient access to Emergency Services. All of these things allowed William Bee Ririe Hospital to improve its quality of care.

2009 Oct - The Board of Trustees approved a three-phase Operating Room and Endoscopy Suite expansion.

2011 Jun - The new operating rooms were dedicated to Norman G. Christensen, M.D., in honor of his 40+ years of service to William Bee Ririe Hospital. The final phase of this project is expected to be completed in 2012.